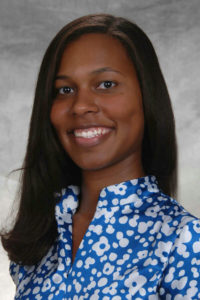 Diana Cejas, MD, MPH, was in her first year of medical school at Howard University College of Medicine when she first noticed the lump in her neck.

“They told me that it wasn’t anything to worry about,” she recalls of the student health center clinical staff. “They said it was probably just a swollen lymph node, gave me antibiotics and sent me on my way.”

This was something that she would come to hear repeatedly as the years went on. Diana returned to the student health center several times during medical school—and each time they told her the same thing—not to worry. By her fourth year, the lump was harder and bigger, both signs that it could be something dangerous.

“But I also remember thinking that if it was really serious, it would’ve killed me by now,” she says.

It would take five years before she finally had answers.

Diana began a surgical ear, nose and throat (ENT) rotation with this mass on her mind every single day, so she informally asked her supervising physician about it. He had the same assumptions as the student health center clinicians—that it was a swollen lymph node and probably nothing. Even when she entered her residency and got a new primary care physician, she was told the same thing.

“I tried not to pay attention to it,” Diana says. But by the second year of her residency, it had grown to the size of a walnut. It was now hard, fixed and felt attached to her lymph nodes. She faced consistent pain, dizzy spells, and nearly passed out several times. She had been repeatedly told it was nothing, but she knew it was something, which is when she followed up with her primary care physician.

“I told my primary care physician, ‘I really need to do something about this,’” she says. Her physician ordered a computerized tomography (CT) scan, which confirmed that it was carotid body paraganglioma, or a vascular tumor. She met with an ENT specialist and a vascular surgeon and was told that they needed to schedule a surgery, but they believed that it was likely benign and nothing to worry about. She went into surgery not long after.

“The surgery went well, and as I was getting my stitches out a week later, they told me that the tumor was malignant, and that the cancer had metastasized to nearby lymph nodes,” she explains. The cancer had spread. Diana needed to undergo a full cancer work-up and have the soft tissue on her neck removed.

During this second surgery to remove the soft tissue, there was a complication with one of her arteries, but the surgical team kept everything under control and removed all of the cancerous tissue. When Diana woke, everything was seemingly okay.

“Twelve hours later, however, I started having neurological changes. I couldn’t move my left side, and I couldn’t swallow very well,” she recalls. “It was the beginning of my stroke.”

Diana survived, but faced days in the intensive care unit (ICU) followed by months of therapy. For a time, she lost most of the feeling in her left side. Today, she still feels the impact of that stroke. She has recovered most of the function in her leg, but her arm is still weak and only has half of the sensory function. She is cancer free.

Looking back, Diana just wishes someone had listened.

While she doesn’t blame the doctors, “I wonder if someone had truly listened to me earlier, when the mass was smaller, would I have had to have the second surgery and then the complications from my stroke?”

Today, Diana Cejas is a pediatric neurologist in North Carolina. Her experience as a patient has influenced the way she practices as a physician. She remembers what it was like to not be listened to, what it was like to not have answers. She works with her patients to figure out what is ailing them and tells them “I don’t know,” when she truly doesn’t and gets them help from someone who does.

“I find myself—more than I did before—on the patient’s side,” she explains. “I’m less inclined to dismiss a patient’s concerns. They’re coming to you because they’re sick, not because it’s fun.”

She completed a program with the Association of University Centers on Disability in her last year of neurology training, and now advocates for people with disabilities, especially now that she herself is disabled. In her spare time, she pens essays and opinion articles, mostly about her own story.

“After my stroke, one of my attending physicians spoke to me about his stroke, and I remember how it made me feel hearing his story,” she explains. “So, I try to be as open as I possibly can be about sharing my experiences, so that others who are going through this or something similar don’t feel alone.”

At the Society to Improve Diagnosis in Medicine (SIDM), we are focused on raising awareness about the magnitude and impact of diagnostic errors within the patient and consumer communities as well as providing tools and resources to equip these communities to participate in achieving an accurate and timely diagnosis.