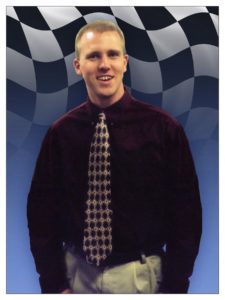 Chad Becken was a 36-year-old man working in payroll in the entertainment industry in Burbank, CA, when he began having strange symptoms in early 2010. Chad was experiencing lower back pain, fatigue, frequent bowel movements, and weight loss. He had visited his primary care physician twice and had gone to Urgent Care once when he finally came to his mom for advice.

“Mom, I am really sick, and I don’t think the doctors know what they are doing,” Chad’s mother, Susie Becken, recalls him saying in January of 2011. “They did some labs and an x-ray. My primary care physician told me I probably have some sludge in my gallbladder the first time I went, and then on my second visit said my liver count is high and it is okay that I have lost some weight. When I visited Urgent Care, the doctor told me I am probably suffering from work-related stress.”

Despite having had received these three diagnoses, Chad knew that none of them were the correct one because he wasn’t getting any better with time. He was frustrated that the doctors couldn’t figure out what was wrong with him, and he felt misunderstood.

“Can you imagine how I felt as a parent?” says Susie, remembering the difficult conversation with her son. “I hugged him and told Chad I loved him, and that I would help him walk this journey. I wanted Chad to feel better, and I knew it wasn’t that simple.”

Determined to help her son, Susie secured a new primary care physician for Chad. She quickly realized that patient- and family-centered care was essential for a valid diagnosis and treatment care plan, regardless of the circumstance or the medical facility. When the new physician examined him, she listened to Chad as he described his symptoms and reviewed his lab results. The physician immediately ordered a colonoscopy.

Chad’s anxiety increased when he received the instructions for his colonoscopy because he didn’t understand them. Fortunately, Susie had experienced the colonoscopy preparation herself, and she was able to assist him with his questions.

After the colonoscopy, the doctor came in the room to speak to Chad and his mother.  “I saw the doctor’s facial expression… I knew it was not good news,” says Susie. It was then, after having been misdiagnosed three times in one year, that Chad was ultimately diagnosed with stage 4 colorectal cancer. Chad was told that the tumor made the colonoscopy difficult, and that it could not be removed because it had penetrated his pelvic wall.

Life After the Correct Diagnosis 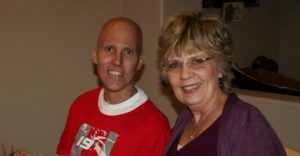 Susie recounts, “I will always remember the day I walked into Chad’s room and he was sitting at his desk staring at his computer. I asked him how he was feeling. He said, ‘Mom, how do you think I am feeling? There is nothing more my oncologist can do for me, I can’t find a cure researching online and you can’t cure me. I am dying inside and there is nothing anyone can do. If the colonoscopy had been done initially maybe I would not die. Mom, I love you. Thank you so much for being my advocate. Please continue to advocate for others so they don’t have to experience pain and suffering like I have.’”

During his treatment process, Chad did not complain about his pain and suffering, and everyone admired his courage, strength, love, and dignity, through such difficult times. At the age of 37, Chad’s cancer journey ended after 16 months of treatment and painful side effects.

“When Chad passed away, I felt as if deep hole imploded inside of me,” says Susie. “The hole left me gasping for air, even though I knew what was happening. The agony is slowing subsiding, but I know it will never disappear. As difficult as it is, I am not resisting the pain of grief because I know the only way to the other side is through it.”

Susie is now a patient advocate, which has given her life new purpose. She will never forget what happened to Chad, and she will continue to fight for increased patient engagement in the diagnostic process. She realizes there was a lack of patient-provider relationship, and a failure by physicians to listen to her son. Susie thinks “if the proper tests were done initially for a valid diagnosis and treatment initiated earlier in my son's cancer journey, then maybe he would have survived.”

Have You Been Affected by Diagnostic Error?

Learn about our program that brings together patient advocates with lived experience and expert researchers to integrate the patient perspective in research efforts.