Running Against the Clock 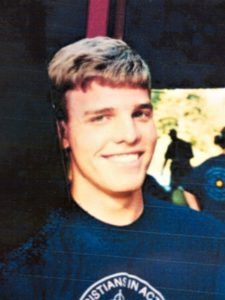 John Alexander James (Alex) was a computer science student at Baylor University. At 19 years old, he was healthy, enjoying the start of his third year in college with a bright future ahead of him.

“He was a fanatical runner,” his father, John James, a medical scientist, recalls. “He wanted to max the Air Force Officer basic physical test, a task that is by no means easy.” To achieve his goal, he would need to run two miles in 13.5 minutes and complete the push-up and crunch requirements.

It was during a training run on the Baylor campus that Alex collapsed. He self-recovered but was rushed to the hospital where he underwent a litany of non-invasive and invasive tests.

Beginning of a Nightmare

At the hospital, one of the first tests Alex had was an electrocardiogram (EKG), a test that measures the electrical activity of the heart. This was repeated several times during his hospital stay. Alex also had an exercise stress test, cardiac ultrasound, and cardiac catheterization test, which involves inserting a thin tube into the heart through blood vessels to check blood flow. His initial EKG showed serious arrhythmia, including a prolonged QT interval. Later tests showed nothing else unusual. “He aced the stress test,” John says. “I remember one of the doctors saying that he’s probably in better shape than any of us in the hospital.”

“I suggested that we compare his initial EKG results to a baseline EKG he had done with the Air Force ROTC a few months before, but his cardiologist didn’t do the assessment,” John remembers. If the hospital had done the comparison; they would’ve seen that his EKG had changed.

“The other thing I noticed was that he had low potassium, but it was just barely below the threshold and his doctors weren’t concerned.” Alex’s initial potassium level was 3.4, just 0.2 points below the normal level of 3.6.

After four days in the first hospital, Alex was transferred to another hospital for an electrophysiology study, which can detect abnormal heartbeats and arrhythmia. The test was inconclusive, finding no cause for his collapse while running.

Following the study, Alex was sent home with no further instructions—including not to keep running, even though such instructions appeared in his medical records. During his follow-up visit five days later, he was given a clean bill of health by a doctor in training. He returned to running a few days later when his wounds from his cardiac catheterization and electrophysiology test healed.

Two weeks after that, Alex collapsed during a solo run and died.

The cause of death was sudden cardiac death due to long QT syndrome, a disorder of the heart’s electrical activity that causes life-threatening arrhythmias that has been discussed in medical literature since the 1980s.

“No one told Alex that he should abstain from running,” John says. “Moreover, that restriction was not noted in his hospital discharge papers.”

After Alex’s death, John wanted to make sure this couldn’t happen to anyone else.

Since that day, John has published a book called ‘A Sea of Broken Hearts’ and authored a study in which he estimated patient harms associated with hospital care. He currently writes a monthly newsletter which takes topical medical studies and puts them into plain language for consumers. Since his retirement in 2014, he’s focused full-time on these issues.

“I sign off all my emails with ‘be well or be careful.’ All of us are going to need to go to a doctor’s office or hospital at some point in our lives,” John says. “I urge everyone to do their homework and insist on shared decision-making. Always ask for a second opinion if there is uncertainty about your best treatment.”