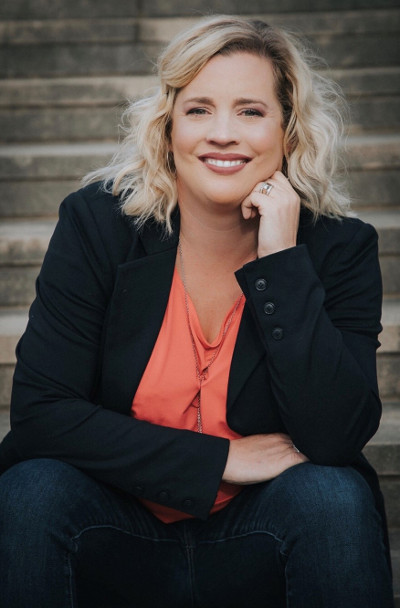 After many years of suffering with endometriosis, Sarah Kiehl and her husband, Andy, were excited to get a positive pregnancy test for the second time, with the added surprise of twins. On Thanksgiving Day 2015, the twin girls were born via C-section.

Twelve weeks later, Sarah went in for a routine laparoscopic hysterectomy. About three and a half weeks after her hysterectomy, she started experiencing large gushes of fluid. After examining her, Sarah’s surgeon determined her symptom was just part of the healing process. But, after experiencing high fever, vomiting, and severe stomach pain in the following days, Sarah decided to go to the emergency department.

After a CT scan they discovered an infected abscess from her hysterectomy. The plan was to be admitted and spend the next 24 hours or so on IV antibiotics. Once admitted, Sarah’s fever spiked into the 104s and she had low blood pressure. Her doctor was on his way in but, in the meantime, the nurses called a Rapid Response. The doctor on call confirmed she was septic and determined the abscess needed to be drained.

Sarah was given medication to prevent blood clots per the hospital protocol, but within minutes she began bleeding heavily. “I could see the fear in the nurse’s face, which is when I started to get scared,” says Sarah. “I sensed that a situation like mine had not come to fruition like this in the past at my hospital.” The source of the bleeding was unknown, and a second CT was ordered.

A second Rapid Response was called when Sarah began bleeding internally and experiencing extreme pain while waiting in a hallway. The CT scan was completed, and the source of the bleeding was found. Her doctor performed emergency surgery that afternoon, making a vertical incision just below her belly button. He removed two liters of blood from her abdomen, stopped the bleeding and cleared the abscess. With low blood pressure, pain, and fever, Sarah’s body was in toxic shock.

“I don’t have much recollection of this time, but I do remember the stress and fear on my husband’s face,” she says. “Throughout the night there were scary moments of very serious low blood pressure and severe pain that couldn’t be treated due to the blood pressure. I was bruised from so many pokes of needles to get IVs.” The plan was to then determine the bacteria she had contracted and for her to spend the next few days recovering on IV antibiotics.

When her blood cultures came back, it was determined that Sarah had contracted Strep A, which can cause necrotizing fasciitis, a flesh-eating bacterium. The delay in her receiving a correct diagnosis caused the hospital team to have to work on the double to prevent further damage. Sarah was given a blood transfusion and she received several doses of potassium along with many bags of fluids to try to raise her blood pressure.

While recovering from surgery, Sarah began spiking high fevers again. Her antibiotics were adjusted, and her surgical incision was monitored because of some surrounding redness caused by cellulitis. The cellulitis spread quickly, and it was determined that with the threat of necrotizing fasciitis, she would need a second surgery to reopen the incision and clear out cellulitis caused by the bacteria.

This time the surgery included an exploration of the wound, as well as leaving the surgical site open instead of stitched back together. The surgeon wanted the best shot at tackling the Strep A bacteria, and leaving the wound exposed to oxygen would ensure the bacteria would die off.

“I was so sad and scared and overcome with guilt that I wasn’t at home with my two new babies and six-year-old that needed me at my fullest,” Sarah recalls. After 13 days in the hospital it was decided that she could come home with home care staff coming to her house every other day.

Sarah didn’t feel ready to go home but she never spoke up. She was still very sick and not able to walk without assistance. “I was so weak I couldn’t even stand in the shower, and my hair was falling out in clumps,” she says. She experienced brain fog during her recovery period, but she knew she was lucky to be alive.

After about 12 weeks she had a closed wound and she slowly began feeling like herself again. “The entire first year was about physical recovery. Now I continue to work on the mental recovery,” reflects Sarah.

Looking back, Sarah wonders if there are things that could have been done differently that would have made her reach the correct diagnosis more quickly. “What if my surgeon had done bloodwork, or investigated my symptoms when I saw him in the office, three weeks after my hysterectomy, and less than four months after delivering twins?” she asks.

She is grateful to have had her husband and multiple nurse friends throughout the hospital that were able to advocate for her. “They spoke for me when I couldn’t,” she says. “It is not easy to leave complete control in other people’s hands.”

Sarah knows that there is no timeframe for healing, and that it is an ongoing process. Since her delayed diagnosis, it has become easier for her to reflect on her experience and use it to help other people. Sarah collaborates with SIDM and Sepsis Alliance to share her story as an advocate for young people struggling with their health. She feels that this event has made her stronger, and she uses that strength every day.

At the Society to Improve Diagnosis in Medicine (SIDM) it is our mission to catalyze and lead change to improve diagnosis and eliminate harm from diagnostic error.

Learn about our program that brings together patient advocates with lived experience and expert researchers to integrate the patient perspective in research efforts.