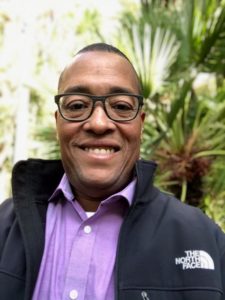 Kevin experiences sickle cell pain attacks sometimes triggered by stress, but typically he can control symptoms himself if he acts upon them early enough. One night, when he was 29 years old, he was not so lucky.

Kevin had just moved to Dallas and was stressed about the move. He began to experience a pain crisis and drove himself to the emergency room. He could not remember his new address and did not have a local license to show, which slowed down the process at the ED, and made ED staff suspicious that he may be drug-seeking.

“It was a Friday night and the emergency room was packed,” remembers Kevin. He waited three hours in the waiting area before being triaged.

His care team ran various tests on him for hours, and although Kevin shared information about his diagnosis with his nurse, he continued to be dismissed as drug-seeking due to implicit bias. Finally, six and a half hours after Kevin arrived at the ED, staff was able to reach his doctor and confirmed his sickle cell disease diagnosis and he was administered intravenous pain medication. He was discharged after the pain was under control and he continued to take pain medication at home.

“If they had been more educated about the disease, my experience would have been different,” says Kevin.

Three years later, Kevin was working as a trainer in Chicago. One night he went to bed after working multiple classes in a row and having a headache all day. He woke up in the middle of the night, still in pain, and tried to stand, but instead fell sideways.

“My brother had had a sickle cell stroke, so I was familiar with the symptoms,” says Kevin. “I knew something was wrong.”

Kevin was able to summon an ambulance on the phone, despite only being able to mumble, but shortly lost all speech capabilities and mobility in his right side. When he arrived at the ED, he was presented by the EMTs as a suspected drug overdose, as they had not heard him say “stroke” on the phone and he could not speak. He could hear the conversations going on about his condition, but he was unable to explain what was really happening and how time-sensitive his care was.

“I was angry because I could not communicate with the care team,” says Kevin. Finally, he gathered the strength to signal for pen and paper with his non-dominant hand. “I’m right-handed but I was able to scribble out with my left hand: ‘sickle cell stroke’.”

A nurse took Kevin’s note and gave it to the doctor, an action that would end up saving his life. The doctor came over and asked Kevin yes or no questions like “are you in pain?” and “are you having a stroke?” Kevin was able to nod at the questions and the doctor involved the neurology department.

Kevin largely attributes the delay in care to his doctors’ lack of knowledge about the variety of symptoms caused by sickle cell disease. Providers may not be thinking about sickle cell disease as a diagnosis because it is so rare.

Meanwhile, a nurse took his business card from his wallet in his back pocket and called Kevin’s employer. She spoke to his boss and acquired more information about Kevin, as well as confirmed his sickle cell disease diagnosis.

After about an hour and a half after he arrived at the ED, Kevin finally received treatment. Today he has weakness in his right hip as a result of the stroke, causing a slight limp on his right side, but he knows the outcome could have been much worse and considers himself lucky.

Since his experiences at the ED, Kevin carries all of his medical records whenever he travels and wears a medical alert bracelet to prevent delays in care in the future. He has become an advocate for sickle cell patients and has worked with a Kansas City based organization called Uriel E. Owens Sickle Cell Disease Association for over three years.

“I wanted to use my voice in the rare disease field in general, so I help patients talk about their rare diseases,” says Kevin.

Sickle cell disease disproportionately affects African Americans, and often patients don’t have insurance, have a low income, or do not have a primary care physician, so they receive their care at the ED. All of these factors may cause providers to be suspicious that the patients are drug-seeking.

“My advice to patients is to understand your disease. Know your base line figures and use medical language to connect better with hospital staff. Medicine can be scary so you should become intimately involved in your care.”