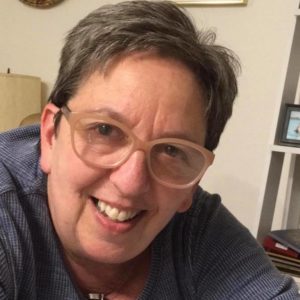 Elizabeth Cohen first experienced symptoms of cholecystitis (gallstones) in November 2011. Her primary care provider ordered an ultrasound to confirm cholecystitis, which it did, but it also picked up a lesion on the liver.

An MRI was done to explore the liver lesion and it came back inconclusive. The primary care provider recommended a needle biopsy. The surgeon Elizabeth saw for a cholecystectomy pre-op appointment advised against a needle biopsy due to potential risk of “seeding,” a potential risk of spreading cancer that can occur when the needle is withdrawn. Instead, Elizabeth underwent a surgery to remove both the gallstones and the left lobe of her liver where the lesion was located.

Following surgery in January 2012, the surgeon assured Elizabeth that the lesion, which was removed, appeared to be a harmless “incidentaloma,” or an incidental finding. Two weeks later, the pathology result came back, and the surgeon called Elizabeth back into his office. To her shock (and his), the diagnosis was hepatocellular carcinoma (liver cancer).

Elizabeth’s surgeon urged her to get another opinion, and a tissue sample was sent to a renowned cancer center in Texas. In early March, the second opinion came back indicating it was not liver cancer, but rather an angiomyolipoma, a rare but benign type of tumor. Despite the differing diagnosis, the pathologist who originally diagnosed Elizabeth with liver cancer stood by her initial diagnosis. But Elizabeth was not yet convinced it was cancer since there were no clinical symptoms which should have been present, including loss of appetite, upper abdominal pain, and weight loss without trying, if she truly had cancer.

“I just wasn’t ready to accept a diagnosis of liver cancer,” says Elizabeth. Elizabeth knew that the next steps following the diagnosis would involve a cancer treatment and she wanted to be certain she actually had cancer.

Elizabeth requested a copy of all original pathology reports and an explanation of the pathologist’s diagnostic thought process. The pathologist provided the literature that had been cited in the hepatocellular carcinoma diagnosis —including an article by a noted soft tissue pathologist at a prestigious institution. Elizabeth reached out to the pathologist and shared her story with him, asking for his opinion. Before long he replied, requesting a tissue sample.

In July 2012, the new pathologist informed Elizabeth that he concurred with the diagnosis that she did not have cancer but had an angiomyolipoma. He said it had a low risk for aggressive behavior and assured her that she did not need to worry about cancer. Seven months post-gall bladder surgery, with no significant changes to her health, Elizabeth finally had reassurance that the correct diagnosis was an angiomyolipoma. If she truly had liver cancer she’d like have been dead by this time. Had her surgeon not urged Elizabeth to seek other opinions, the next step likely would have been unnecessary cancer treatment.

Life After the Error

At the time of her misdiagnosis, Elizabeth was in graduate school earning her Master’s in Public Health (MPH) degree, and she had a class on health policy and advocacy. The final for the class required students to give a presentation on any health topic, proposing a hypothetical policy to address the selected issue. Drawing inspiration from her own recent lived experience and using the 2015 National Academy of Medicine report “To Err is Human”, Elizabeth chose to present on medical error and proposed legislation requiring continuing medical education in medical and diagnostic error.

From May 2017 until June 2020, Elizabeth worked at the Society to Improve Diagnosis in Medicine, her dedication to the mission fueled by her own lived experience.

Since the cancer misdiagnosis, Elizabeth feels anxious about routine checkups. “I lost confidence in the system,” she explains. Moreover, she learned the importance of patient advocacy when her doctors disagreed on a diagnosis.

“I wish there had been communication between the surgeon, who knew me clinically, and the pathologist, who only saw my cells under a microscope. What if there had been better collaboration and discussion between my surgeon and the pathologist to look at the situation holistically?” she wonders. “This might have been concluded much more quickly and might have prevented a lot of stress and anxiety to me and my family over the seven months it took to finally reach an accurate diagnosis.”

“I think I’m one of the luckier patients,” she says. “I was misdiagnosed with something life-threatening that turned out to be inaccurate. If I had not advocated on my own behalf and if my surgeon hadn’t recommended I get another opinion, I probably would have gone through unnecessary chemotherapy. It was a traumatic experience, but fortunately, my diagnostic story had a happy ending.”

Tools and Resources
Scroll To Top