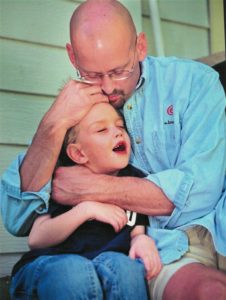 Patrick Sheridan, Global Division Manager for a software company and father of two young children, began to develop pain in his neck and shoulders. Although he sought out physical therapy and then acupuncture as ordered by his primary care doctor, the pain persisted. An orthopedic specialist finally ordered an MRI scan that revealed a concerning mass in his cervical spine.

Pat was referred to a well-respected teaching hospital in another state where a neurosurgeon successfully removed the mass. Based on the preliminary pathology report, the surgeon reassured Patrick and his wife, Sue, that it was a benign tumor and that he did not need further treatment.

However, unbeknownst to the Sheridans, over the next few weeks additional tests were performed on the specimen, resulting in a final pathology that was faxed to Patrick’s neurosurgeon. Apparently, the final pathology was filed in Patrick’s medical record without the neurosurgeon ever seeing it. No action was taken.

Meanwhile, Patrick and his family celebrated what they thought was his recovery. But, six months later, the pain was back. The lost pathology report was now discovered. The final diagnosis turned out to be an aggressive, malignant sarcoma requiring urgent treatment.

During the six months of non-treatment, the tumor metastasized and penetrated his spinal cord. Patrick endured seven surgeries and several rounds of chemotherapy and radiation, but the cancer persisted. At the end of Patrick’s life, he was paralyzed from the neck down. He died in 2002 when he was 45 years old, leaving his wife, Sue, and two children - ages four and six.

After her husband’s untimely death, Sue became the co-founder of Consumers Advancing Patient Safety (CAPS), which helps organizations engage patients as partners in developing patient-safety solutions. She spent 10 years in patient advocacy inspired by adverse family experiences like her husband’s within the healthcare system. Sue served as the external lead of the Patients for Patient Safety program at the World Health Organization (WHO), as the Director of Patient Engagement for the Patient-Centered Outcomes Research Institute (PCORI) where she led the Patient Engagement team, and as the Patient and Family Engagement Adviser at CMS, CCSQ, QIIG where she helped integrate the Person and Family Engagement Strategy throughout the CMS community.

Over her 25-year professional career, Sue has helped develop and implement programs, policies, and processes to help prevent diagnostic errors and to encourage meaningful engagement of patients in research, policy, medical education and quality improvement. Sue served as the Director of Patient Engagement for the Society to Improve Diagnosis in Medicine from 2018-2019, where she amplified patient voices and ensured that patients become part of the diagnostic team.

The Patient's Toolkit for Diagnosis is a resource created for patients, by patients.