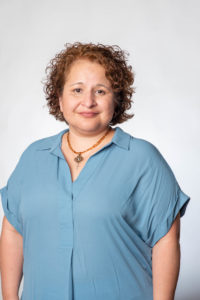 Sandra Kaus was a typical mom living in Dumfries, VA with her two sons and husband. In 2012, at her annual OB/GYN appointment, Sandra’s doctor found a small lump in her left breast. As recommended by her doctor during that visit, Sandra had a mammogram completed. She did not receive any additional instructions and Sandra had been told that the radiologist would call her if something was wrong; otherwise, it was safe to assume that things were fine. She did not hear back and assumed she was well.

One year later, at Sandra’s next annual check-up, the doctor found that the lump in her breast was now significantly larger. Sandra’s doctor reminded her that they had found the lump the year before; Sandra confirmed that she had gotten a mammogram done as instructed. She recommended that Sandra get another mammogram.

But, before that could happen, Sandra’s left breast began to ache. “My left breast started to feel like someone was hitting me,” she recalls. After a week of tests, Sandra was diagnosed with stage three breast cancer in 2013.

Two weeks after the devastating diagnosis, Sandra received a call from a doctor asking her if he could come to her house to speak to her and her husband. It was during this meeting that Sandra learned that a radiologist had found a spot in her 2012 mammogram and that someone had accidentally checked off a form that said that the mammogram had been compared to a previous mammogram. Because of this oversight, Sandra did not receive the call about the spot and everyone assumed that Sandra was healthy.

“It was hard finding out about the delayed diagnosis. In fact, I was annoyed that they gave me this knowledge to add to my plate,” she acknowledges. As Sandra and her family struggled to wrap their heads around the cancer diagnosis, they felt shocked to also learn that a diagnostic error had taken place.

Although she was stunned to find out that she had been involved in a diagnostic error that ended in her being diagnosed with stage 3 cancer a year too late, Sandra was not bitter nor did she feel hopeless. “My delayed diagnosis was an administrative mistake that had been reviewed and was fixed so that it would be less likely to happen again,” she explains. “No one did it on purpose, nor was it pure negligence.” As part of her treatment, Sandra decided on a double mastectomy to eradicate all traces of cancer and minimize the chances of it ever coming back.

Ever since her experience with misdiagnosis, Sandra double checks all information with her doctors, and she urges other patients to be equally proactive. In 2015, she joined the Patient and Family Advisory Council for Quality and Safety as a volunteer to ensure patient safety and medical efficiency. “Because of my medical accident, I am now helping to prevent further accidents from happening,” says Sandra. “I am really proud to say that.”