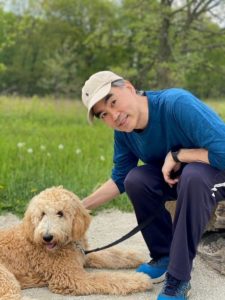 Tom Lee had done a medical exam for life insurance that included routine blood work when the insurance company informed Tom that one of his liver enzyme values was too high. They requested that he follow up with a specialist. Although he was asymptomatic, Tom went to see a gastroenterologist who did additional blood work and found that the same enzyme values were still high. Tom’s gastroenterologist recommended a special type of high-resolution MRI on a new machine at the hospital.

When the radiology report came back, the results suggested that Tom had primary sclerosing cholangitis (PSC), a rare liver disease that damages the bile ducts inside and outside the liver. Tom’s doctor informed him that patients with this disease had a 6-10-year life expectancy and they often needed a liver transplant.

“With young kids at the time, the diagnosis was pretty shocking,” said Tom. “I have been a Type II diabetic for a long time, so something with a 6-10-year life expectancy really felt like it hit me over the head.”

Tom’s doctor referred him to a specialist that he often collaborated with at an academic medical center to evaluate him for a liver transplant. It was difficult to schedule an appointment with the specialist, so Tom was only able to meet with him three to four months later.

“In that time, my world was turned upside down,” said Tom. “Things were going pretty well at work at the time, but with my family, it was a lot of hard discussions and emotionally trying to come to terms with it and think about what I would do if I were only around for another six years.”

Tom did a lot of research on his own about PSC, and although he knew that it was a rare condition, he felt more ready to accept a rare disease diagnosis after his son’s own rare diagnosis of Kawasaki disease four years prior, a condition that causes inflammation in the walls of some blood vessels in the body.

“I already knew that things that are supposed to be very rare can definitely happen to you or your family,” explained Tom.

However, when Tom finally was able to meet with the specialist that his doctor referred him to, the specialist looked at the lab results, asked Tom some questions, and ultimately told him the likelihood that he actually had PSC was extremely low. This shocked Tom because the specialist and the doctor that made the initial diagnosis knew each other and Tom suspects there was a communication failure between the two clinicians.

“The fundamental issue is that if those two doctors had had a quick discussion about my case, it would have saved significant emotional angst and money,” said Tom.

The specialist also let Tom know that the machine used to perform his MRI is unreliable particularly when the machine has been newly installed, and it requires special training to be able to run the test properly. The specialist suspected there had been issues in the way Tom’s MRI had been set up as well as the way the imaging was interpreted.

Additionally, the specialist explained to Tom that there could be many reasons those particular liver enzyme values were too high, including interference from Tom’s diabetes medication. In fact, if he had PSC, he would likely have other liver enzyme values out of the normal range.

Life After the Scare

“The best Christmas present I ever received was the negative results,” said Tom, “but then I thought, ‘is there anything I could do to prevent this from happening again’?” Tom called up the first doctor’s office and left a voicemail saying he had experienced a misdiagnosis and wanted to let the doctor know, assuring the office that he was not planning to take legal action. Tom did not receive a follow up call or any kind of response to his voicemail.

Since then Tom has joined the SIDM Board of Directors and has been an active member of the diagnostic improvement community. As an advocate for patient education and clinical decision support, Tom had the opportunity to attend some of the earliest Diagnostic Error in Medicine conferences.

“It is important for patients to understand how complex the diagnostic process can be and how many system-related issues there are that still need to be solved,” said Tom. “But on the positive side, we can train people to make a measurable difference. We can engage innovation and tech solutions in diagnosis and get patients more involved in their own diagnostic process.”