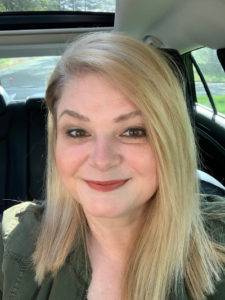 Kellie Schroeder is no stranger to the inside of a doctor’s office. Five years after her gastric bypass surgery and four years after her stage 1 melanoma diagnosis, Kellie experienced severe knee pain, which turned out to be a blood clot. The urgent care provider gave her a blood thinner, then admitted her to the hospital after bloodwork showed she needed a transfusion.

Kellie’s hematologist sent her for a colonoscopy to check for internal bleeding. When the test came back normal, the doctor told Kellie she was likely iron deficient due to malabsorption problems resulting from her gastric bypass surgery.

“I thought that was odd, because I was fine for years after that surgery,” says Kellie. Yet, the doctor put her on Coumadin therapy—an anticoagulant used to prevent and treat various blood clot disorders—and iron infusions to bump up her hemoglobin levels.

When Kellie moved to a new city a few years later, she was still on Coumadin but continued to drop iron after each infusion, so she made an appointment with a new hematologist. Kellie told her new doctor about her melanoma and surgeries; he too diagnosed her with anemia due to malabsorption and ordered more transfusions.

“I was confused because I had an iron infusion the day before we moved,” recalls Kellie. “But I was iron-deficient within three weeks of that transfusion.”

Kellie went to urgent care when she began having severe bladder, pelvic, and back pain. After a computed tomography, or CT scan of her abdomen, she was diagnosed with a urinary tract infection and uterine fibroids, which are noncancerous growths of the uterus. Prescribed antibiotics killed the infection, but the pelvic pain lingered.

“It hurt when I leaned against a counter or drove over speed bumps,” says Kellie. “Since I wasn’t planning to have more kids, my gynecologist recommended a hysterectomy to remove the growths and alleviate the pain.”

Kellie’s pre-surgery bloodwork indicated that she needed a blood transfusion before they could move forward, even though she just had an iron transfusion six weeks prior. “I was continuing to lose lots of blood, and no one knew why or where it was going,” says Kellie.

During the hysterectomy, the surgeon found a tumor on Kellie’s bowel, so an oncology surgeon stepped in. Further testing revealed that Kellie had three stage 4 melanoma tumors on her bladder and bowel, one of which was the size of softball.

“The doctors called them blood balls,” explains Kellie. “They were literally sucking up all of my blood, but once the surgeons removed them, my hemoglobin began to rise.”

Still in the Dark Today

Looking back, Kellie wishes she pushed harder for more testing, especially when she moved cities and switched to a new hematologist.

“He immediately made assumptions about me,” says Kellie. “If he had run a full battery of tests, not only could it have saved me from two surgeries, but it could have brought this to light so much sooner—perhaps before the cancer evolved to stage 4.”

Since her cancer progressed for so long undetected and untreated, Kellie and her doctors don’t know her long-term prognosis.

“If we had treated the tumors more quickly, my health now might be different,” says Kellie. “I still need a contrast CT every three months, because until the cancer gets big enough to spot, I won’t know if I have it. I feel like I can never say I’m cancer free.”

Kellie has undergone a year of cancer treatment, but she experiences major side effects that keep her from working and regular activities. That’s one reason she tries to share her story—to encourage others to wear sunblock, and to be their own best advocates.

“I have a high pain tolerance, so I would usually convince myself that it would just go away,” says Kellie. “But I’m glad I didn’t, because otherwise I would have died. Always remember that you know your body best and speak up when something seems or feels wrong.”

Use SIDM's Patient Toolkit for Diagnosis to prepare for your next medical appointment and enhance your partnership with medical professionals.