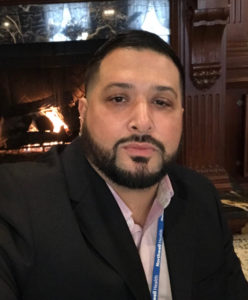 A father of three, 36-year-old Daniel Rodriguez had good health despite a family history of heart issues. After his daughter required heart surgery and his father needed an aortic valve replacement, Daniel sought out a cardiologist, who deemed that he had inherited his father’s leaky aortic valve and would need open-heart surgery.

“Since I felt well, I found this doctor’s approach too aggressive,” says Daniel. “I sought a second opinion from an internist and cardiologist who’d been practicing medicine for longer than I’d been alive. He said surgery could wait, which put my mind at ease.”

In March 2016, Daniel began to experience what his doctor deemed as anxiety and prescribed Xanax. By July, he felt so lethargic it was difficult for him to move around the house.

But in just a few months, Daniel lost 30 pounds, went to primary care doctor four times, and resigned from his job. In November, he was diagnosed with anemia and developed bumps on the side of his head, one near the temple and another on the top of the head.

“I was spiraling downhill,” Daniel recalls.

With the knowledge of Daniel’s family history of cardiac issues and his leaky aortic valve, Daniel’s doctor sent him to a vascular surgeon, who suggested that the bumps were benign and recommended applying pressure to them to reduce the size, but they could be removed via an outpatient procedure if it didn’t decrease in size. Daniel elected for the procedure due to growing discomfort.

However, Daniel experienced a seizure before the surgery could take place and was taken to the hospital. Doctors suggested he had vasovagal syncope, a condition that mimics a seizure, and which they said was triggered by digestive issues. He was sent home.

Daniel could barely walk or support himself in the days following. His family took him to his doctor’s office and he collapsed walking into the examination room. Daniel’s doctor monitored him and suggested he purchase Beano, an over-the-counter drug to treat the presumed digestive issues.

“I kept thinking that something is really wrong,” Daniel recalls. “I just wish I’d found someone to take me seriously.”

The next morning, Daniel lost total motion control of his body. The paramedic who arrived on the scene explained that his blood pressure was 70/20, and that his body was shutting down. He was rushed to the hospital for emergency admittance.

A computerized axial tomography (CAT) scan, which produces cross-sectional images of the body, revealed that Daniel had either parasites or lesions on his brain. His heart rate slowed to 20 beats per minute on several occasions and stopped altogether three times. He was transferred to the critical care unit and had an external pacemaker installed on the side of his neck.

“I was told I would need a permanent pacemaker, because the chambers of my heart had stopped communicating,” says Daniel. “I was scheduled for surgery and went under anesthesia to receive the device.”

But Daniel woke up without a pacemaker, because doctors discovered he had endocarditis, a bacterial infection that had destroyed one of his cardiac walls and two valves.

The infection had also spread to his brain, creating aneurysms on his skull and cerebral cortex, which explained the brain lesions on his CAT scan.

“I was eventually able to trace the cause of the endocarditis to a cut I got at work. That was all it took—a small cut,” Daniel explains.

He was in the hospital for 48 days to treat the brain aneurysms and endocarditis with antibiotics, but endured Stevens-Johnson syndrome during that time, which causes the skin tissue to die and detach. Daniel’s medical team repaired his heart through a series of surgeries—first replacing his aortic valve, microvalve, and wall with prosthetic materials, then installing a permanent pacemaker.

Today, Daniel is unable to work, so he is a devoted stay-at-home dad. Determined to find the good in his tumultuous health journey, he volunteers once a week at Northwell Health’s Northshore University Medical Center and serves on a patient-faculty advisory committee to improve and enhance the patient experience.
Although Daniel focuses on the positive, he struggles with post-traumatic stress disorder from his adverse health experiences and has periodic vertigo due to brain damage from the aneurysms.

“My advice to anyone else facing serious health issues is to follow your gut instinct,” says Daniel. “If your doctor tells you it’s all in your head, find another doctor.”