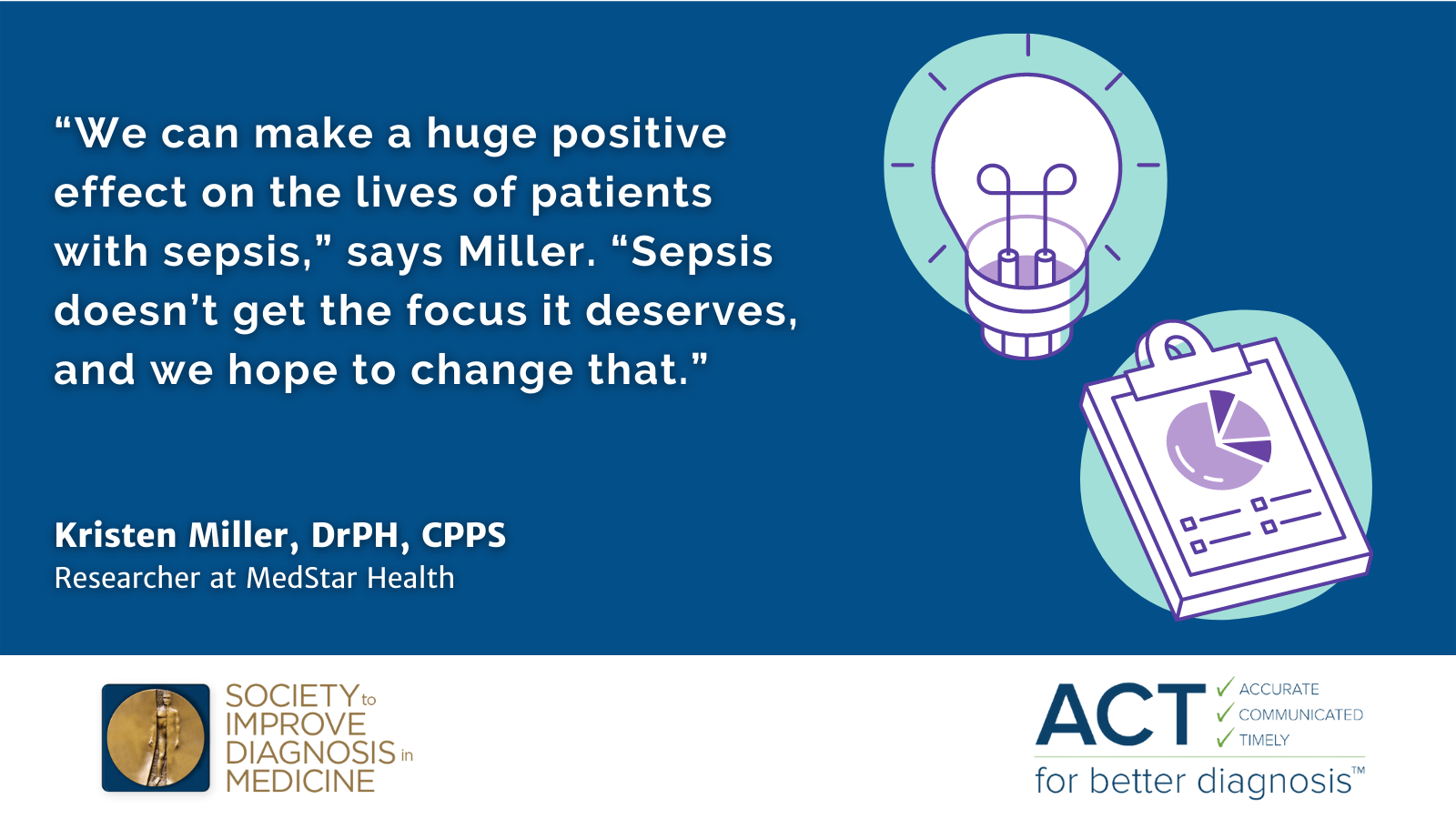 What follows is an interview with Kristen Miller, DrPH, CPPS, a researcher at MedStar Health, a not-for-profit healthcare organization. MedStar Health was awarded a SIDM DxQI Seed Grant, an initiative of The Society to Improve Diagnosis in Medicine with support from the Gordon and Betty Moore Foundation, to design a specific clinical decision support tool. The tool for a specific group is built into the electronic health record and integrated into the workflow, to provide all the information that they need to help support diagnosis and clinical management of sepsis patients.

Sepsis is the leading cause of hospital deaths in the United States. What is sepsis and how can you detect an early diagnosis?

“Sepsis is an extreme response to an infection that triggers a chain reaction throughout the body, is a leading cause of hospital deaths in the United States,” said Miller. “It's defined as infection plus organ dysfunction, but it can come on quite rapidly, and there's no gold standard test to diagnose whether a patient has sepsis or not.”

Unlike diabetes, where physicians can use tests such as an A1C to determine diagnosis, Sepsis is a bit more challenging and requires knowing characteristics of the patient. MedStar believes that the supporting advanced practice providers and response nurses play a critical role in helping to support not only the accurate diagnosis, but appropriate clinical management of sepsis patients.

“They really serve as another set of hands, another set of eyes and ears for patients who potentially have sepsis and are at risk of deterioration,” said Miller.

How did you develop the tool?

“For us specifically, we needed to understand how to develop a tool in a way that supports the clinician workflow,” stated Miller.

To develop the tool, MedStar focused on a user-centered approach so that clinicians have the information they need, but don’t feel overwhelmed by that amount of information. MedStar also focused on understanding what is currently happening. Focusing on questions such as:

How has the COVID-19 pandemic affected the development of the tool?

MedStar had plans to create a dashboard that would contain all the relevant information, including relevant comorbidities, vital sign trends, and lab results. The team would confirm the sepsis diagnosis faster, facilitating a faster clinical response.

“The COVID-19 pandemic forced the research team to rethink and update its project plan. The researchers wanted to integrate the dashboard quickly, however, MedStar Health’s health information technology team had to prioritize COVID-19 tools. The extra time allowed the researchers to deliberately review and focus their intervention,” said Miller.

Where do you hope to go from here?

MedStar plans to launch the program at the MedStar Washington Hospital Center, and findings from that pilot will be used to scale and inform future expansions to other MedStar Health hospitals. Ultimately, their goal is both to reduce the time it takes to diagnose sepsis and improve clinician recognition of the infection. In a year, the researchers hope this tool will be a home base for sepsis response nurses.

“We can make a huge positive effect on the lives of patients with sepsis,” says Miller. “Sepsis doesn’t get the focus it deserves, and we hope to change that.”

“This is taking an intervention and idea that we have and testing it out immediately, compared to the numbers years needed to do the research,” stated Miller. “It’s pushing us to build a tool quickly but do it well to work with the operations and clinical team.” “This tool will impact care tomorrow, next week, next month, and so on.”