What follows is an interview with Orlaith Staunton, Co-Founder and Executive Director of END SEPSIS, the legacy of Rory Staunton, a not-for-profit organization formed after the untimely and preventable death of her twelve-year-old son Rory from undiagnosed and untreated sepsis in 2012. Orlaith, along with her husband Ciaran, have a life mission to end preventable deaths from sepsis. END SEPSIS is now the leading sepsis advocacy organization affecting real change through policy measures.

Early diagnosis and treatment of sepsis is key to survival – what do clinicians and patients need to know about sepsis and early diagnosis? 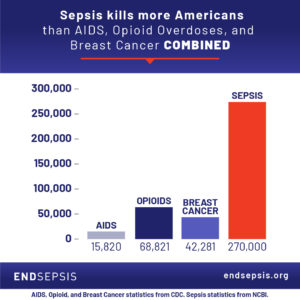 END SEPSIS believes that a two-pronged approach is necessary to end preventable deaths from sepsis. They also believe that early diagnosis depends on the general public being made aware of sepsis, its relationship to infection, and its signs and symptoms–just as people are taught to recognize the signs of meningitis or heart attack–so that they can seek immediate medical assistance.

When early diagnosis is detected, patients must be met by healthcare providers who are trained to “think sepsis,” recognize its signs and begin immediate treatment.

END SEPSIS, the Legacy of Rory Staunton, was founded following the undiagnosed, untreated, and preventable death of 12-year-old Rory Staunton from sepsis. How has Rory’s story shaped the work END SEPSIS has done and continues to do?

After scraping his arm diving for a ball in his school gym, 12-year-old Rory woke that night with pain in his leg; he had a high fever and was vomiting by the morning. His pediatrician thought he had the stomach flu and sent him to the emergency department to treat him for dehydration and vomiting. The emergency room ordered blood tests but never followed up on the results and agreed with Rory’s pediatrician that he had the stomach flu and was sent home.

Rory’s parents contacted the pediatrician again after his fever seemed uncontrollable and he seemed not to be getting better, and she insisted that he had the gastric flu. Rory was taken to the emergency room in intensive care fighting a serious infection. Through the cut on his arm, bacteria entered his blood, and he went into septic shock. Tragically, Rory died 48 hours later due to streptococcal sepsis.

“Our son Rory should not have died,” said Staunton. “Our family, and especially Rory, spoke loudly and clearly about his symptoms to the medical professionals we trusted to help him; his symptoms were dismissed–and he died as a result. Honoring Rory’s short life by ensuring that no other life is lost to sepsis is our North Star. It guides everything we do as an organization.”

The manner of Rory’s death from sepsis was preventable, diagnosable, and treatable and is tragically common. It informs our focus on preventing infection, raising awareness of the symptoms among children and parents, and advocating for the adoption of mandatory sepsis protocols in every hospital in the country to rapidly identify and treat sepsis when it presents.”

END SEPSIS has had great success at the local level with policies to support diagnostic safety. Can you tell us more about that?

In 2013, END SEPSIS partnered with the New York State Department of Health, Northwell Health and New York hospital associations to implement a statewide mandate called Rory’s Regulations requiring all hospitals to develop protocols for the rapid identification and treatment of sepsis. New York became the first state to mandate sepsis protocols in all medical institutions. Rory’s Regulations are the gold standard in sepsis policy, providing invaluable data to policy experts. These protocols saved 5,000 lives in the first 23 months of operation and continue to save thousands of lives each year, resulting in a 40% reduction in pediatric sepsis deaths.

In addition to Rory’s Regulations, New York State has adopted Rory’s Law requiring all 468,000 medical and other healthcare professionals to undergo mandatory sepsis training to renew their professional licenses.

The regulations also include a Parents’ Bill of Rights, requiring hospitals to implement procedures to ensure that parents and primary care providers receive vital information about children’s care, particularly by facilitating the communication of key tests and lab results.

While other states have adopted sepsis protocols, they are now actively pursuing a national response. END SEPSIS is committed to ensuring that evidence-based, mandatory sepsis protocols are instituted in every hospital in the country.

You’ve recently developed a project focusing on maternal sepsis, why the focus on this patient population?

The U.S. has the highest maternal mortality rate of any industrialized country, and the numbers continue to rise. According to the CDC, maternal sepsis is now the second leading cause of maternal death. High rates of maternal morbidity from sepsis result from acute physical, psychological, and emotional trauma for survivors.

“The U.S. has the highest maternal mortality rate of any industrialized country, and the numbers continue to rise,” said Staunton. “END SEPSIS has always been committed to serving the interests of families. We felt we needed to address the maternal sepsis crisis as part of that commitment.”

Can you tell us more about the coalition you have developed and the campaign to reduce maternal mortality due to sepsis?

END SEPSIS secured a contract from the U.S. Department of Health and Human Services’ BARDA DRIVe program. The initiative is designed to help identify those at higher risk of developing maternal sepsis. END SEPSIS partnered with the New York State Department of Health to develop a dataset of all maternal sepsis cases between 2016 and 2018 and identify associated risk factors. The analysis results were clear: Hispanic, Black and Asian women, women under the age of 20, and women who underwent a C-section delivery were at significantly greater risk of developing maternal sepsis.

In addition to the partnership with the NYS Department of Health, the foundation has formed a maternal sepsis coalition consisting of patient advocacy organizations, professional associations, hospital systems and government agencies. These subject matter experts assist in developing and disseminating educational resources for patients and providers that are informative, accurate, and engaging, including a public service announcement, electronic brochures, and two provider webinars.

Are there tools or products you have developed that our Coalition members should know about?

END SEPSIS is still in the process of rolling out patient and provider materials, but interested individuals can visit the Maternal Sepsis Initiative page to view the new public service announcement and learn more about the campaign.

For more information on New York State’s risk factor analysis and to watch the first webinar, titled Maternal Sepsis: New Data, New Approaches to Improving Care, on-demand, visit NYS Data Analysis page. For those who would like to join the campaign and receive updates when new resources are launched, sign-up at END Maternal Sepsis.

“We strongly encourage all SIDM members to become ambassadors for sepsis awareness, talk about the problem and engage in conversations about solutions,” stated Staunton.

How have you involved patients or family members of patients in the design and development of the campaign? If not, is that something you’ve thought about or have planned down the road?

END SEPSIS firmly believes in the power of those directly impacted by sepsis to drive change. In 2015, it established the National Family Council on Sepsis. It’s comprised of families affected by sepsis through the loss of a loved one or through their own survival of sepsis. The Council works at the federal, state, and local levels to advocate for the adoption of improved sepsis policies, increase awareness of the condition, raise funds, and support grieving families and sepsis survivors. In addition, patient advocates are spokespeople for public awareness campaigns–including appearing in public service announcements–and act as consultants on specific projects.

The maternal sepsis coalition includes maternal sepsis survivors, including April Chavez, who contributes invaluable thoughts and recommendations to the materials they produce as part of their work in this area.

What barriers have you overcome to advance your current work?

“Since the founding of END SEPSIS, the biggest challenge has been that sepsis was utterly unknown to the vast majority of Americans,” said Staunton. “We really felt that we were starting from scratch. When Rory died, we, his parents, had never heard the word ’sepsis’. We were shocked to discover that it kills 275,000 Americans every year. We found that sharing our personal story was the best way to capture attention and start a conversation about sepsis.”

The Stauntons’ also found the lack of urgency on this issue by policymakers and public health experts incomprehensible.

“To give just one example, to understand what had killed our son, we turned to the CDC, only to find no mention of it in their comprehensive online A-Z of diseases. This has since been remedied following our protest,” said Staunton. “No national policy or strategy existed to combat this monumental killer and no effort was being made to create one. Thankfully, over the past nine years, we have developed fantastic supporters and allies and huge changes have been made in terms of awareness and policy. Of course, much, much more remains to be done.”

What does being part of the Coalition mean to END SEPSIS?

“We believe in the power of collaboration and being part of this Coalition is very important to us,” said Staunton. “SIDM is leading the conversation around the burden of diagnostic error. By joining together, we are better able to address the problem and find solutions that reduce harm and ultimately ensure better outcomes for patients.”